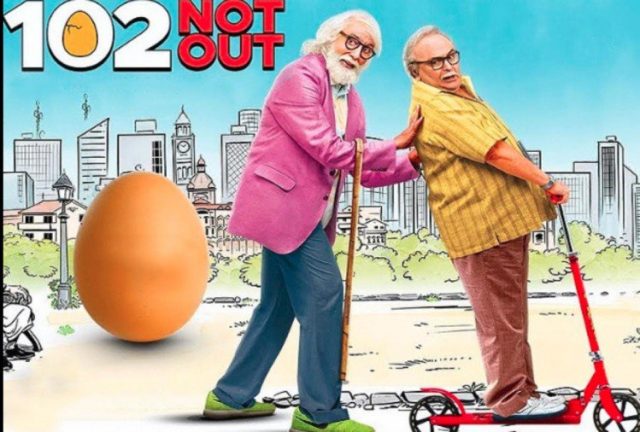 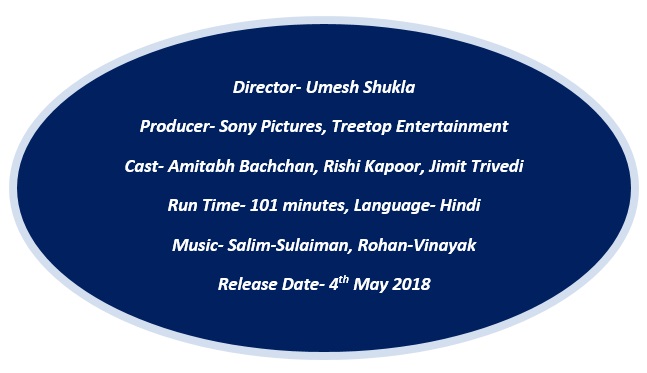 The movie is about a 102 year old lively, optimistic father Dattatraya Vakharia (Amitabh Bachchan) and a 75 year old cynical, pessimistic son Babulal (Rishi Kapoor), who unfortunately don’t have much in common. While the father’s appetite for a fulfilling life knows no boundary, the son is confined in his melancholy.

Dattatraya is on a mission of creating world record of the oldest living human. In order to do that, he has been suggested to stay away from boring and dull people, who unfortunately in this case is his own son Babulal. He is an old-school son to his super-cool dad. For sake of his prestigious record, and his inability to tolerate the negativity oozed by Babulal, Datta decides to become the first father ever to admit his son in an old-age home. Babulal, who can’t adjust in any environment but his home, asks for another way out. Dattatraya, then, comes up with few challenges and asks Babulal to clear them all to retain his stay in the house. He asks the son to fulfil his five conditions over a period of six months. But it is more than just a game for them.

102 Not Out, directed by Umesh Shukla and based on a Gujarati stage play by Soumya Joshi, is purely based upon the Father-Son relationship, which makes it a ‘Family Entertainer’. After ‘Oh My God’ (which also was a Gujarati play adaptation), 102 Not Out would add another milestone to Shukla’s career. It gives a mixed experience of excitement and pleasure, watching the two ‘Seasoned Living Legends’ together in one frame. They both with their ‘Mastered Craft’ present the scenes full of emotions and nostalgia, and simply keeps on adding charm to an otherwise simple and plain story. And it becomes inevitable to mention about their astonishing ‘Comic Timing’.

Most of the film has been shot in Vakharia house, and rest at some important landmarks of Mumbai. Dhiru, the friendly neighborhood medicine delivery guy, played by Jimit Trivedi, is the third character in the film. A third character is required to take the story forward and add a neutral perspective. Though he also contributes to the fun and emotional quotient of the film, still it could have been presented in a better way.

It’s rare in Bollywood to have films centering the old people, because of its obsession with youth and their issues. It would not be an exaggeration to say that Amitabh Bachchan, who was known as Angry “Young” Man in his first innings, has successfully broken this myth, with his second innings in Bollywood. He is the only star to play ‘elder protagonists’, and still bringing something new in his every film. His films like Baghban, Sarkar, Cheeni Kum, Bhoothnath or Piku, has presented him as an Old Hero, who was fortunately equally lovable for the viewers. This film is an addition to his list, which clearly states that ‘Old’ doesn’t always mean grey hair, thick specs, artificial dentures, wrinkles and ill health only. It could be a life beyond that which is full of fun and hope. There could definitely be a ‘Happy Old Man’. 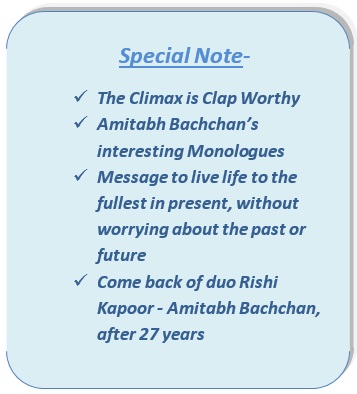