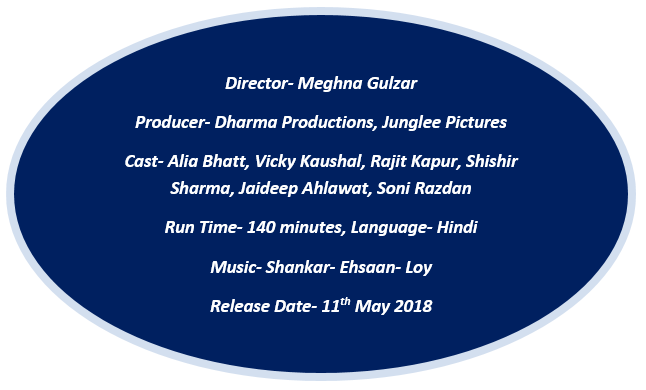 The title of the film refers to a woman who gets Raazi ‘agree’ to play a disguised spy, on the stake of her life. Raazi is a dramatic adaptation of Harinder S Sikka’s novel ‘Calling Sehmat’, in which a 20-year-old Kashmiri girl Sehmat Khan (Alia Bhatt) inherits her father Hidayat Khan (Rajit Kapur)’s espionage duties. Hidayat has been using his trade contacts with Pakistani Army officers to collect information for India’s Research and Analysis Wing. His daughter is studying in Delhi when Hidayat learns that his country is in danger, and his ill heath will not support him now. Pakistan is planning a secret military operation, for which Hidayat lays out a scheme to send his daughter to Pakistan, as a spy. The young girl whose name itself is Sehmat (agreed), gets convinced for the secret mission. For this she undergoes rigorous training under Indian intelligence agent Khalid Mir (Jaideep Ahlawat) before being married off to Pakistani Army officer Iqbal Syed (Vicky Kaushal). Her assignments include observing the uncharted territories and making key information available to the Indian government.

Sehmat’s efforts to settle into her new home and win the trust of the family of high-rank Pakistani army officers in order to do the job she’s been assigned, is the most compelling part of Raazi. Meghna dials up the tension as Sehmat puts her training to use, frequently landing in scenarios where her cover comes dangerously close to being removed. It also highlights the married life of Sehmat & Iqbal that has been otherwise set up for a purpose.

Meghna’s detailed characterization of each of the prominent players, based on the backdrop of early 70s, and her treatment of the spy subject makes this thriller a complete package. The way Sehmat blends into her husband’s family and becomes part of their daily existence is handled with such finesse. And yet, this baby-faced spy doesn’t lose sight of her mission for even a second. As you watch Sehmat undercover, your heart comes often to your mouth because you don’t want her to get caught.

Meghna assembles gifted actors to infuse further credibility into the storytelling. Rajit Kapur and Shishir Sharma are especially strong as Sehmat’s father and father-in-law respectively. Soni Razdan has a little role to play, as Sehmat’s mother. But the film’s most substantial relationship is between Khalid and Sehmat, who share an underlying bond and mutual respect. Shankar Ehsan Loy’s music along with Gulzar’s lyrics, leave a strong impact in songs full of patriotism. Sehmat’s transition from a carefree young girl to a responsible woman, who plays the role of a daughter, wife, spy and patriotic together, is worth watching. 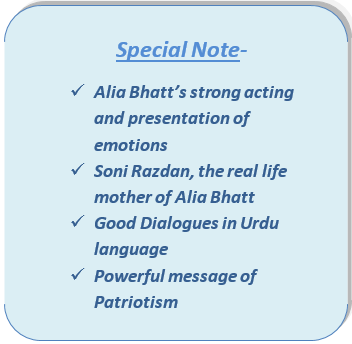