To begin with, you will find all the gloomy themes in the film, such as- Prostitution, Immorality, Drugs, Poverty, Crime, Imprisonment and Betrayal. More or less there are reflections of the previously made dark films, that shows the hidden darkness of a particular section of society, like- Slumdog Millionaire, Salaam Bombay and Satya.

Beyond the Clouds is the story of a disillusioned brother-sister duo. In their struggle to survival, they get landed up themselves in a situation that is difficult to be rescued.

Amir (Ishaan Khattar) is a boy working for a sex-trafficker gang, couriering drugs around town on his motorbike in disguise of making fast-food deliveries. One day he is chased by cops and reaches to his sister Tara (Malavika Mohanan) to hide him. Akshi (Goutam Ghose), a known of Tara, saves Amir into a pile of his clothes. Later, Akshi makes sexual demands on Tara in favour of helping Amir, and she hits out at him. That leads Akshi to hospital and Tara to prison, awaiting trial for attempted murder. She’s carted off to jail, where she’ll remain for life if Akshi dies. Amir—whose parents are dead and whose relationship with his sister is complicated—resolves to find a way to get her out of jail, but worse is to come for both.

Facing the heights of misery in their life, the two kids are still filled with emotions & innocence. As Tara takes over the care of her sickly cellmate’s young boy, while Amir, in a strange narrative twist, finds himself looking after the bedridden Akshi’s aged mother (G.V. Sharada) and two daughters.

The film is a Hindi debut of great Iranian Film maker Majid Majidi, who has been nominated in Oscars for his movie ‘Children of Heaven’, and known for his other movies like ‘Colour of Paradise’. The film is filled with thrilling energy in many scenes. Known for his realistic & humanistic cinema, Majidi perhaps was forced to alter his senses with Bollywood melodrama because he wanted his venture to be a mainstream entertainment suitable for the larger Indian market — primarily making it a box-office material.

The film showcases the landmarks of Mumbai, such as Marine Drive, Chhatrapati Shivaji Terminus and the Gateway of India, that represents the bright & metro version of Mumbai city. While showcasing of Brothel, Dhobhi Ghat (the place of washer men), Local Train, Underworld and Slums represents the dark & underprivileged version of the city. This can be taken as the director’s vision of showing ray of silver lining, even in extreme darkness, which actually gives a reason to survive.

The film is already an internationally acclaimed project, as it had been the curtain raiser at the 48th International Film Festival of India 2017, in Goa, and was also nominated for the Best Film Award at the London Film Festival 2017. The debutant Ishan Khatter, marks his impressive presence with his expressions and energy, but there is a lot more to go. The effort, however, seems a bit confined on the part of Malavika Mohanan, still she manages to showcase her acting skills. Vishal Bharadwaj handled the scripting and dialogues well. 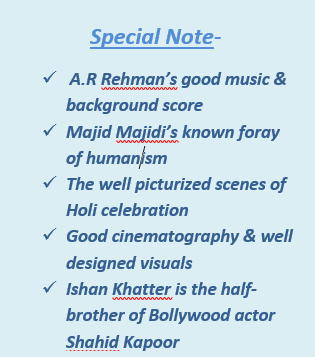