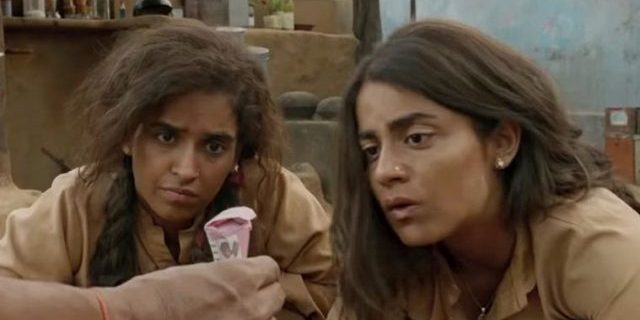 Pataakha is the story of sisters who are born to fight with each other. And this is not a casual sibling rivalry but a passionate hatred within kins. Champa/Badki (Radhika Madaan) and Genda/Chhutki (Sanya Malhotra) do not get along, and it’s the biggest bane of their existence. This strange sibling relationship forms the crux of the film, where the Rajasthani language, attire and the rustic rural setting together do wonders with the subject.

While Badki gets along more with cows and aspires to own a dairy one day, Chhutki is fond of eating lady fingers and wants to be an English teacher. They live with their father who is a miner, already frustrated with the corrupt officers (Vijay Raaz). The girls who are fondly named on flowers by their poor father, are no less than bombs, and strive to explode on each other constantly. Their father tries his best to make them calm and bring peace among them, but his every effort gets into vain. Their neighbor and close friend of the sisters Dipper (Sunil Grover), who is also the most important character, despite being the narrator of the film. He leaves no stone unturned instigating a war between the sisters, and make the entire village enjoy watching them fighting. Dipper keeps explaining to Bapu the relationship between sisters as the relation between India and Pakistan, who have been in constant fight with each other.

Both the sisters decide to get married by eloping with their respective partners Jagan (Namit Das) and Vishnu (Abhishek Duhaan), and think that now they would have a peaceful life, as they will not be together anymore. But immediately after their weddings, they get a lifetime shock that actually turns their life towards a new direction. Now one likes Television and other likes Smart Phone, but the agitation towards each other never gets at rest.

Vishal Bhardwaj has done a good job, especially by presenting his heroines as the most shabby, wild, loud and carefree. Their foul language, village dialect and violent confrontations, all were shot with perfection. The emotional quotient and light comic punches remains constant throughout the film, also we never lose connect with the characters. But few things seem to be repetitive, and few sequences seem to be stretched. The second half shows the psychological problem and solution to the rivalry among sisters, which also seem to be logical. The climax has been shot beautifully, and narrative is also upto the mark.