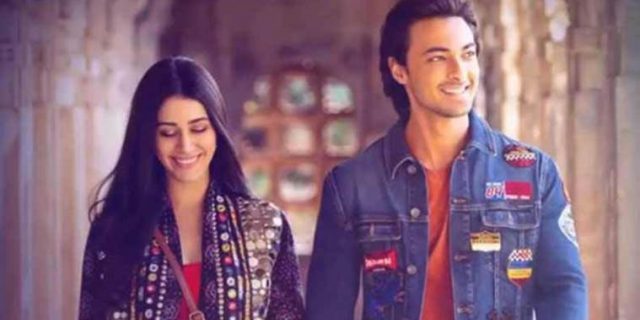 In Vadodara of Gujarat, Sushrut (Aayush Sharma) is a Garba dance teacher who is a good-for-nothing boy in his father’s eyes. Constantly under the pressure to find a stable job, this boy has a dream to open a dance academy of his own.

Over to London in the United Kingdom, Michelle (Warina Hussain) is a daughter of a powerful businessman (Ronit Roy) and keep demanding from her father a trip to India. Her father reluctantly agrees; they arrive in Baroda and extend their stay to celebrate Navratri on the insistence of his imposing Gujarati family. During the ‘festival of dance’, Susu falls in love with Michelle at first sight. He becomes the typical lover boy who goes head over heels to woo her. It’s autumn and love is in the air for Sushrut and Michelle. But soon a misunderstanding creates a rift between the two and Michelle flies back to London.

There is a cool and convincing mama (Ram Kapoor) to help his bhanja get the love of his life. There are also two plain-looking friends of the hero (Pratik Gandhi and Sajeel Parakh) who add spice to the scenes, Apart from this the hero’s only job is to keep a regular check on the ‘progress’ of his love story.

Every beat of the story is familiar, the conflicts come off as outdated and unconvincing, and practically characters are not memorable.
Written by Niren Bhatt and directed by Abhiraj Minawala, LoveYatri is, for all practical purposes, the Aayush Sharma show. He gets the proper ‘hero’ treatment with soft-focus, slow motion entry, multiple opportunities to lose his shirt and flaunt his body, and catchy songs to show off his dance moves. Ultimately, the film is a grand launch pad for him only. But Aayush Sharma is just about okay and that too till an extent; he has the screen presence but that’s restricted to very limited expressions. Love stories that are a launch pad for debutants rarely offer anything radical. They are more platforms for them to showcase their talent — dance, drama, action, comedy. Loveyatri does nothing different. But without the backing of even a few good moments, there is no drama, no passion, no fun, no spirit, no spunk.

LoveYatri has nothing new to offer in terms of premise. You have seen it all before. Rich girl-poor boy, a scheming father and a change-of-heart. Naren Bhatt’s writing lacks the spark to keep you hooked. The dialogues barely create an impact. Abhiraj Minawala’s flat direction and cliched plot fails to make you fail in love with LoveYatri. Since the story requires their lead actors to be innocent and naïve young lovers, their innocent face works in their favour, but the emotionally heavy dialogues are difficult to handle by them , and even difficult to digest by the viewers. As we say, too much sugar leads to diabetes!!