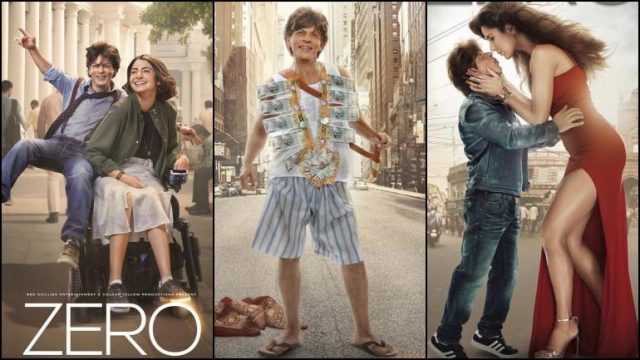 From Meerut, Bauua Singh is a vertically challenged 38-year-old unmarried man. He is at a point of life where he has accepted the truth of how he can never match up to the normal people. Without any qualms, he lives his life king-sized with his friend Guddu (Mohammed Zeeshan Ayyub). He madly loves the superstar Babita Kumari (Katrina Kaif) but at the same time is also have applied at Shaadi.com for marriage.

He falls in love with a scientist, Aafia (Anushka Sharma), who is affected by cerebral palsy. Their unlikely love story travels from India to the US and all the way to outer space too. Along the way, it meets with various interesting challenges as well. First-half majorly concentrates on developing the beautiful bond between Bauua Singh and Aafia. But Bauua Singh leaves Aafia for some reasons and moves on to Babita Kumari. What happens next is what’s the story is all about.

Zero has a story with an interesting and inspiring concept that doesn’t hold back with its outrageousness. This Meerut-to-Mars romance tries to put forth too many ideas and doesn’t quite do justice to any one. Some of the visuals and romantic moments are striking, but most of them disappear as quickly as a shooting star.

Early on in Zero the novelty and the curiosity of watching Shah Rukh Khan play a vertically challenged fellow wears off much to the film’s advantage. Bauua Singh of Meerut is all of four feet and six inches – we get it. But admirably Bauua doesn’t indulge in self-pity, and the filmmakers don’t make a play for your sympathy. Bauua, in fact, is cocky, motor-mouthed, and charming in a rough-around-the-edges sort of way. He may be short in height, but he’s seldom short of confidence.It’s a great character, and in the hands of director Anand L Rai, writer Himanshu Sharma, and Shah Rukh himself, Zero opens with promise. They set upon authentic, textured world with characters that feel real. Bauua’s parents (Tigmanshu Dhulia and Sheeba Chaddha) are fed up of his wastrel lifestyle, never holding back for fear of hurting his feelings.

One thing this film does get right is its hero’s frenetic energy and acerbic humour for which Shahrukh proves to be an excellent fit. Crucially though, the writer and director themselves do not view him through a condescending or contemptuous lens. Bauua gives as good as he gets, piercing through the barbs with a tongue that is sharper than a butcher’s knife and a skin that is thicker than rhinoceros hide. He pulls off romantic moments with his usual charm and intensity. While the ideas are unique and appreciable, the narrative doesn’t connect all the proverbial dots in the arc of the story. The plot of Zero, neither engages you, nor does it offend you.

Moving on, the story travels to the US and goes on a Mars-inspired mission, too. It’s here that the graph of the movie and the characters just does not add up. The script has its moments, but it does not translate into the larger-than-life love story that it aspires to be, and definitely feels too long drawn. Especially the second half seems to be too stretched and unconvincing.

Superstar Babita has had her heart broken, and as a result she’s angry, permanently intoxicated, Katrina really gets into the part, bringing Babita’s pain and cynicism to the surface in a nicely realized performance. Anushka Sharma’s character has wonderfully sketched and depicted, the mannerisms employed by the actress to portray the handicap, looks consistent and convincing.

Zero is a story of three ‘damaged’ individuals, and how they end up healing each other. But that idea is buried under the weight of an overwrought screenplay that packs in much more than your patience can handle. By the time the second half kicks in, Zero feels like an entirely different film from the one we were promised. The good part is that director Aanand L Rai’s characters never let their physical challenges overpower their spirit and resilience.