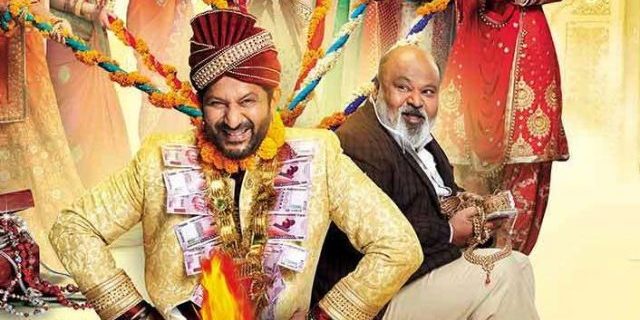 Bhola (Arshad Warsi) is a fraud who marries women just for their money and moves to another after using them monetarily. Chaurasiya (Saurabh Shukla), one of the relatives of one of Bhola’s wives comes into the scene. Chaurasiya, coincidentally, finds out the truth about Bhola.

Hailing from North India, Bhola is a seasoned con artist who manages to marry 13 different women, just so that he could live-off their money, without having to work for his own self. The film, in bad taste, reduces women to mere objects; where they are often projected as dumb and sex-deprived people in this senseless comedy. An actor of Arshad Warsi’s caliber should probably not feature in a regressive film like this. The ladies are, like it’s been mentioned before, absolute props in the film, shown in the most distasteful manner. Although Arshad Warsi is funny as always, but with a lacklustre storyline at hand, even he can’t save the disaster that is ‘Fraud Saiyaan’.

While one expects Shukla’s entry to be the film’s turning point, it takes an absolutely bizarre route from here on to ultimately get trapped in a self-created coil. Even at 1 hour 50 minutes, Fraud Saiyaan takes ages to complete its runtime. By the interval, you, as a viewer, are certain that you have been on a pointless journey so far.

The fundamental problem with Fraud Saiyaan is that the conman thinks that he is too smart but we are never introduced to his clever antics. The women here are inexplicably dumb and it is only because of them that our main man comes across as intelligent in certain scenes. Warsi’s charm is hard to resist and his comic timing sometimes lifts lines that do not deserve him, but there is only so much even a gifted actor can do with a script that is running on empty.