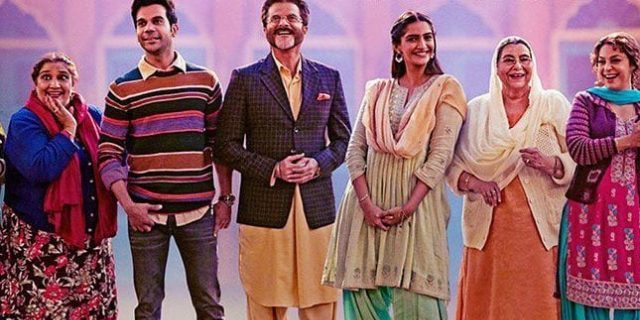 The film starts off with the traditional boy-meets-girl setup, where Sahil (Rajkumar Rao) finds himself carried away by emotion. A random, but pretty girl, Sweety (Sonam Kapoor), grabs his hand and pulls him into a chase. And the boy, as you’d expect, falls in love and sets off on a path to track the girl down and profess his undying love. Most of the film’s first half is spent in setting up this rather old-fashioned portrayal of courtship. The girl’s loveable, but conservative Punjabi family is also pooled into the story as the Beeji (Madhumalti Kapoor), Veerji (Abhishek Duhan) and Papaji, Balbir (Anil Kapoor) bring in the traditional family drama. The film spends a little too much time setting up the deliberate, but misleading track that is in essence, building up to Sweety’s ultimate confession. Once she does come-out and reveal that the romance between the boy and girl won’t materialize, the film too, changes gears.

The film is centredaround young Sweety Chaudhary who has spent her life hiding her truth from those dearest to her, but the film is not about same-gender love alone. It is about living and loving as we choose, not allowing societal norms around age, gender, religion or anything else to suffocate us and hamper our personal or professional choices.

In some ways, half the writers’ battle is won even before their narrative kicks off. A sweetness pervades the screen as soon as Anil enters the picture in the opening moments. After all, nostalgia is one of the most powerful weapons in the hands of any filmmaker, and we have been primed for this sentiment from the moment we heard of the cast and the title. It gives the memory of the blockbuster song of the same name from the legendary R.D. Burman’s very last film soundtrack, or the memory of that film starring Anil as a young man, that same Anil who stands before us now with a gray beard and lined face, a living breathing testament to how gracefully we could hope to age if we treat our bodies well? And we see him now sharing space with his real-life daughter who was a child when 1942: A Love Story was released. The next generation representing the same song is definitely a catch here.

Screenwriter Gazal Dhaliwal and director and co-writer Shelly Chopra Dhar impart a genteel amiability to the tale, which springs its surprises without seeming to be overly radical in its portrayal of gender identity and homosexuality. Notions like disease, abnormality and family honour are invoked repeatedly and in no uncertain terms, and a woman’s inner turmoil as she fights for the right to lead her life on her own terms is treated with restraint and empathy. The film’s even tone is enhanced by the restrained performances from the key members of the fantastic ensemble cast. In the end, it is a sensitive, tender and humour-laced melodrama that hinges as much on the relationship between a lonely, misunderstood small-town Punjab girl and her doting father as on the heroine’s sexual orientation, which drives her into a difficult-to-break shell.

Indo-Russian Strategic Partnership On The Upswing