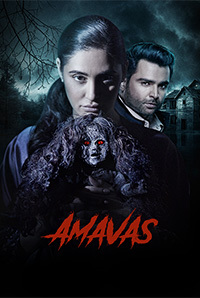 Karan (Sachiin Joshi) and Ahana (NargisFakhri) is a couple who are supposed to be in love, but it doesn’t seem like they are. While Karan looks forever unhappy and depressed, Ahana is super-excited and bubbly throughout the film. The most frightening thing about Amavas is that this couple that knows nothing about each other’s past and talks about nothing real, thinks they have a shot at a future as a married couple. An incredibly ungainly lead pairing, both have zero chemistry with each other.

To seek happiness, the duo take a trip to their old summer house in Europe which is haunted, and this outing at their palatial summer mansion turns into a nightmare for the couple, as they battle supernatural forces and try staying alive. If a woman combs her hair at night, it’s sure to attract spirits. This superstition is a continuous trope in this ‘horror’ film and is used to take the story ahead. While Karan is a schizophrenic in the film, he acts more like he is confused except for when he is struck by migraines whenever he hears the tolling of bells.

Goti (Ali Asgar) is a butler, caretaker and lame attempt at comic relief rolled into one toothy character. The first hour is a series of songs and late night visits by the ghost. Creaking doors, locked rooms, things that go thump in the night — all the tropes are in place. Mona Singh as the resident psychiatrist, two friends from Karan’s hostel days (played by VivanBhatena and Navneet Kaur Dhillon) add on the character count. As far as the horror is concerned, the ghost is extremely predictable even when it tries to surprise you. Director Bhushan Patel unimaginatively locates the events in a misty old house, and even the lights do not work. Every now and again the narrative takes a break to slip in a song, which makes this screenplay even more intolerable. As for the significance of the title, spirits get stronger during an eclipse, we are told, and we get to face that.

India continues to engage with world economy while maintaining its identity through Atma-Nirbharta: President