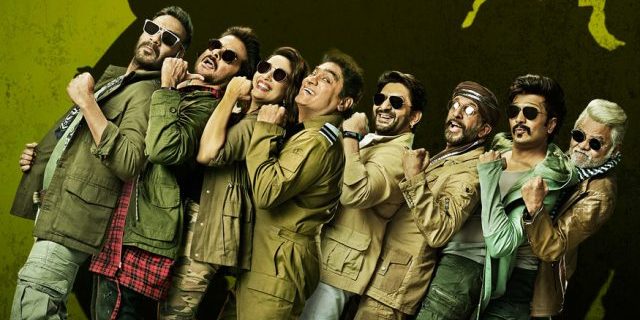 Total Dhamaal is basically a remake of Dhamaal from 2007. Both films are about a bunch of strangers and their madcap pursuit of stolen wealth hidden in a far-flung spot. Indra Kumar ensemble up his actors to chase a 50 crore rupees in loot.

Anil Kapoor and Madhuri Dixit is a constantly bickering couple at the cusp of divorce. Ajay Devgan and his sidekick Sanjay Mishra are well-groomed thugs. RiteshDeshmukh and Pitobash are firemen who charge a premium for priority rescue of residents from a burning building. ArshadWarsi and Javed Jaffrey are not-so-bright siblings who get into a scrape with a smart car. And BomanIrani is a corrupt police commissioner joined at the hip by his wisecracking subordinate Vijay Patkar.

Director Indra Kumar’s Total Dhamaal leaves very little to imagination in creating a loud comedy. However, the ensemble star cast aside, this pursuit for comic adventure turns into a misadventure pretty early on in its ride. The film opens on quite a goodnote with the grand title song introducing each one of them. They are immediately bunged in together in an unconvincing plot twist.

While everyone is in pairs of two, it’s the magical pairing of Anil and Madhuri that brings out the most laughter moments. The duo still share a crackling chemistry and an impeccable partnership for comedy. Anil is hilarious with his amusing Gujarati accent and Madhuri uses her natural flair for Marathi to hit all the right comic notes.  Ajay Devgn performs well within the limitations of his poorly written character.

The problem with the script is, it’s never stable. The jokes come in large quantities but many of them misfire. It also fails because of focusing more on stars (Ajay, Anil and Madhuri) and sidelining the original cast of the film (Arshad, Jaaved and Riteish). The script is unforgivably lazy. There are setups galore at the front but there are no payoffs. Instead, Kumar and his actors move from setup to setup, hoping we have indeed left our brains at home. Few scenes are hilarious, but most of them are based on nonsense comedy. Not only film’s screenplay, but even most of the punches are predictable. While the first half is breezy, second half is overburdened with too many characters in a weak plot.