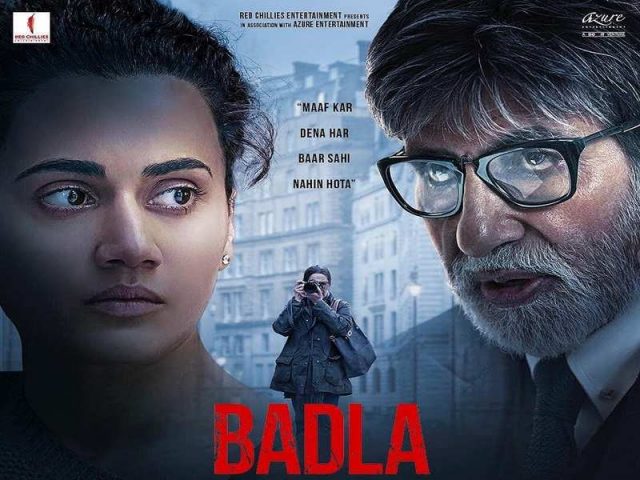 Naina (TaapseePannu) is accused for the murder of Arjun (Tony Luke). Her lawyer Jimmy (ManavKaul) hires the senior advocate Badal Gupta (Amitabh Bachchan) to help crack the case and defend Naina, but her confessions to Badal add twists and turns to the murder mystery. Badal Gupta the lawyer who has lost no case, comes in the scene to help Naina. He gives Naina exactly three hours to speak out every truth she knows, else there’s a high chance she could get arrested owing to a new witness coming to light.

The narrative moves back and forth in time as Badal interrogates Naina, talking and recollecting the murder. The interaction between the two central characters is fashioned as a verbal duel — with both withholding the truth and their real intentions. The shades of their characters are revealed as the story progresses. Badla is essentially a two-hander filled out by Amitabh Bachchan and TapseePannu, last seen together in Pink. Most of the film takes place within a room, with these two main characters constantly shifting positions, both physically and morally. As each layer comes off, with Badal persuading Naina to ‘tell the truth, and nothing but the truth’, we are privy to a little more information. The source remains Naina, but with each reveal, we are forced to examine the facts.

The film is set in Scotland, and this considerably enhances the look and feel, as cinematographer AvikMukhopadhyay highlights telling details with unmistakable sharpness. That said, the characters operate in an entirely Indian milieu, being questioned by Indian policemen and interviewed by Indian journalists — who show up to appointments dressed in the same clothes as their ID badges. The film’s zig-zag plotting is its biggest strength although it’s not especially hard to figure out the ending. Yet Ghosh keeps the suspense at boiling point and the viewer invested in the outcome. You could put it down to the film’s crisp pace, or to the cast who work hard to pull off their roles convincingly. Fashioned as a sort of verbal duel between client and lawyer, the film sees Naina making revelations and Badal challenging her claims.

Apart from the story, it’s also the ‘importance of minute details’ in the screenplay that makes the film given the tense mood. There are multiple moments that will entangle your mind-wires, but you’ll lose by the time the twist appears in the climax. Despite all the many twists there are some which are predictable. At some places, things get too obvious and when it’s the same as you thought, the narration loses its essence.

Taapsee’s character has many shades and they’re revealed one by one as the story progresses. The actress makes all the transitions seem perfectly authentic. Her natural craft makes her to deliver the difficult performance with much ease and comfort. Amitabh Bachchan’sability to pull off the best lines with his elegant baritone, makes the performance beyond appreciation. His sharp and edgy looks, and his voice makes him a charmer, who catches all your attention. Together, both actors combine to create the right amount of tension and thrill. Supporting cast plays their respective roles well, but these two main characters tend to steal the show.